Motorola has paved its way for the debut of Z2 force smartphone in Indian market. Just like the earlier ‘Force’ versions, even Z2 force gets the shatterproof display with Motorola’s ShatterShield. Essentially, this technology protects the phone’s display from every odds of daily use. Now, Lenovo-owned Company is offering Moto Z2 Force with Battery mod as a Limited Edition.

Moto Z2 Force features a 5.5-inch QHD POLED ShatterShield display with 1440 x 2560 pixels resolution. The water-repellent nano-coating on the device safeguards from splashes. On the other hand, Motorola is providing 4-year guarantee for the screen even for drops and falls.

Discussing further specs, the smartphone is powered by a Qualcomm Snapdragon 835 SoC. While other flagships are touting the updated Snapdragon 845 SoC, this may disappoint moto loyalists. Indian users get a standard 6GB RAM variant along with Adreno 540 GPU. The smartphone sports 64GB internal storage runs Android 8.0 Oreo out of the box.

The 64GB inbuilt storage can be expanded up to 2TB maximum with a microSD card. All other regular connectivity options persist in the device and are updated versions. Sensor range in the device includes an ambient light sensor, barometer, accelerometer, gyroscope, proximity sensor and a magnetometer. The home button on front panel incorporates a fingerprint sensor in it and keeps up the style.

The Moto Z2 Force is backed by a 2730mAh battery which the maker claims it can last all day. Yet, TurboPower Battery Mod in Moto Z2 force boasts 3500mAh power. However, the company hasn’t listed any deal which sells the device alone excluding the battery mod. The smartphone comes with a 15W TurboPower charger which provides 8 hours usage with 15 minutes of charge. 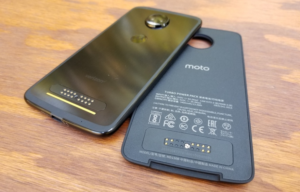 Moto Z2 Force with battery mod price comes first while comparing it to any other flagship. Indian users need to pay Rs.34,998 to grab their Limited edition Z2 Force which puts Mi MIX 2 in the competition ring. On the other hand, the crowd puller OnePlus 5T 64GB version stands as the toughest competitor. As both the devices offer almost same specifications, Battery mod in Moto Z2 Force stands unique.

Fact is that both the above-mentioned competitors are tough guys in the segment for many reasons. Considering the present scenario, a premium offering from Moto Z series again may not grab user’s attention. The highly prices Moto mods could be the main reason amongst others. Despite OnePlus 5T’s popularity and Mi MIX 2 build quality, Battery mod in Motorola Z2 Force might help to increase sale numbers in the country.

Presently, Motorola has a decent stake in the mid-level smartphone market but the premium models aren’t up-to-the-mark. Summing up all, Z2 force will put forward the best of Motorola’s effort to attract premium smartphone buyer’s attention.